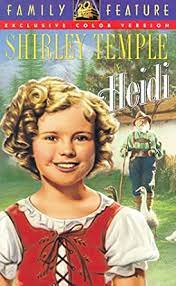 The beloved classic film “Heidi” concludes the inaugural series at 10 a.m. on Saturday, August 27. This 1937 American musical film stars Shirley Temple as the titular eight-year-old Swiss orphan, who is taken from her mountain-dwelling hermit grandfather, Adolph, to live in the wealthy Sesemann household in Frankfurt as a companion to Klara, a sheltered, disabled girl in a wheelchair, who is constantly watched by the strict Fräulein Rottenmeier. When Klara’s body and spirits mend under Heidi’s cheerful companionship, Rottenmeier sells Heidi to the gypsies, but she is stopped by the police, rescued, and reunited with her grandfather. The film was a success and Temple enjoyed her third consecutive year as number one box office draw.