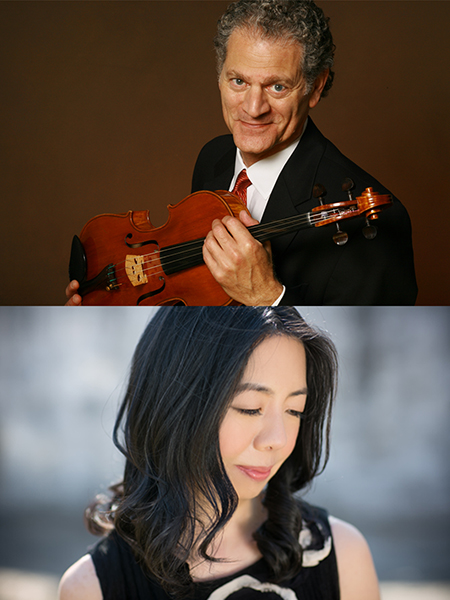 "Hoffman was at his best when the music assumed the eloquence of a passionate, pleading human voice. The rich tone of his instrument was modulated so delicately at times that it almost seemed about to form words.” – The Washington Post

Our concert series brings touring artists for intimate performances in the museum. Programs range from classical to old-time, traditional Appalachian to jazz – with something for all ages. Our concert series runs monthly from June to September, as well as special events.

Concerts are on Sundays from 4 p.m. until approximately 6 p.m. They take place in our intimate Atrium, which seats 60 guests. Seating is first come, first served and the museum opens at 1 p.m. on Sundays during the summer. Each concert will have a brief intermission.

Tickets for the 2018 season are now on sale and can be purchased online or in person at BRAHM’s front desk during regular museum hours.

MILES HOFFMAN is the founder and violist of the American Chamber Players, with whom he regularly tours the United States, and the Virginia I. Norman Distinguished Visiting Professor of Chamber Music at the Schwob School of Music, in Columbus, Georgia. He has appeared as viola soloist with orchestras all across the country, and his solo performances on YouTube have received well over a half million views. His radio modules, A Minute with Miles, are a daily feature of South Carolina Public Radio, other networks around the country, and NPR Podcasts, and as classical music commentator for NPR’s flagship news program, Morning Edition, he is regularly heard by a national audience of some 14 million people. His musical commentary, “Coming to Terms,” was a weekly favorite throughout the United States from 1989 to 2002 on NPR’s Performance Today, and his book, The NPR Classical Music Companion: An Essential Guide for Enlightened Listening, first published in 1997, is now in its tenth printing from Houghton Mifflin Harcourt. He has written articles for the New York Times, the Los Angeles Times, the Washington Post, and the Wilson Quarterly. A distinguished teacher and clinician, and former dean of the Petrie School of Music at Converse College, Mr. Hoffman has presented countless master classes, workshops, children’s programs, and other educational programs at schools, colleges, and conservatories around the country, and he has been a featured lecturer and keynote speaker for orchestras, chamber music series, festivals, and various professional organizations and conferences. He is a graduate of Yale University and the Juilliard School, and in 2003 he was awarded an honorary Doctor of Humane Letters degree from Centenary College of Louisiana in recognition of his achievements as a performer and educator.

First Prize winner of the Joanna Hodges Piano Competition and the Zinetti International Competition, pianist REIKO UCHIDA made her New York solo debut in 2001 at Carnegie’s Weill Hall under the auspices of the Abby Whiteside Foundation. She has appeared as soloist with many American orchestras and has performed solo and chamber music concerts in distinguished venues in the United States, Japan, France, Italy, Germany, Russia, Finland, Bulgaria, and the Czech Republic. Her festival appearances include Spoleto, Tanglewood, Santa Fe, and Marlboro. As a chamber musician, Ms. Uchida was one of the first pianists selected for Chamber Music Society Two, the Chamber Music Society of Lincoln Center’s program for outstanding emerging artists. In addition to her recital performances with Miles Hoffman, she has been the recital partner for Jennifer Koh, Thomas Meglioranza, Jaime Laredo, and Sharon Robinson, with whom she performed the complete works of Beethoven for cello and piano. She has appeared often as a guest artist with the American Chamber Players, and she has also collaborated with the Borromeo and the Tokyo String Quartets. She is currently a member of the Laurel Trio and a member of the Moebius Ensemble, a group specializing in contemporary music and in residence at Columbia University. Ms. Uchida began studying the piano at the age of four, and when still a child she performed with her friend Anne Akiko Meyers on Johnny Carson’s Tonight Show. She holds a Bachelor’s degree from the Curtis Institute of Music, where she studied with Claude Frank and Leon Fleisher, and a Master’s degree from the Mannes College of Music, where her principal teacher was Edward Aldwell. She currently resides in New York City, where she is an associate faculty member at Columbia University.

This concert is made possible through the generosity of Louis Gottlieb, Bill & Judy Watson, and Ed Kelly.