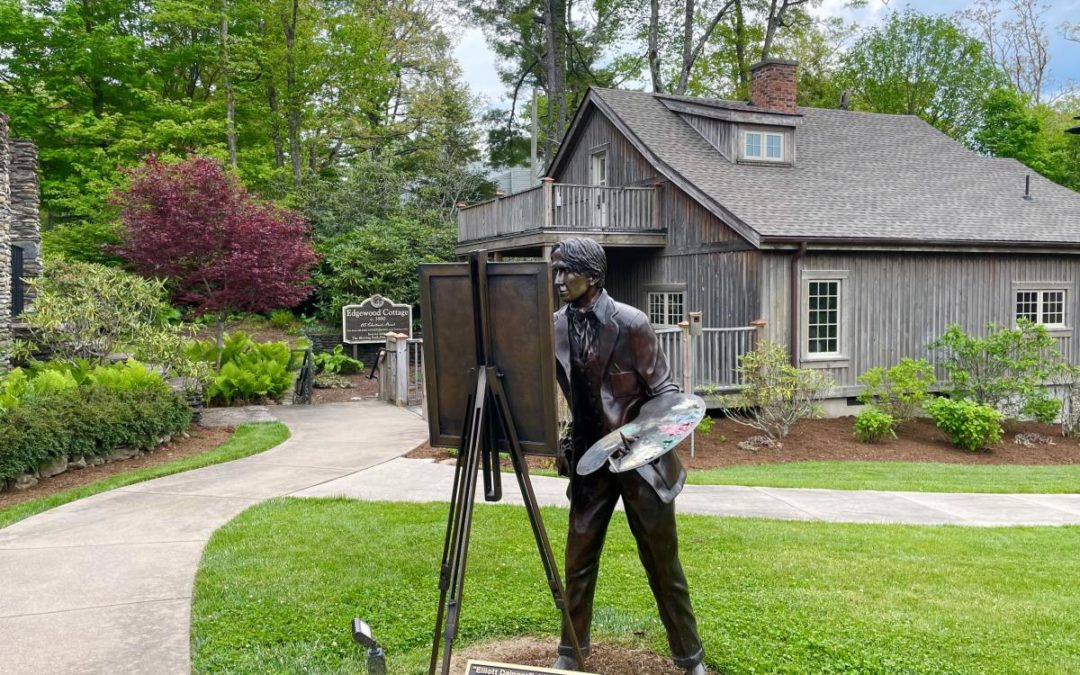 Built around 1890, Edgewood Cottage was the first home and studio of artist Elliott Daingerfield (1859-1932) and was revitalized by the Blowing Rock Historical Society to preserve his legacy.

Elliott Daingerfield was born in Virginia and trained as an artist in New York,  In 1989-90, he came to Blowing Rock with his first wife, Roberta, and built Edgewood Cottage. She died two years later. Daingerfield threw hinself into his work, taught classes at Philadelphia School of Design and summer classes at his Blowing Rock home from 1895-1915.

1900, a newly remarried Daingerfield completed his second home in Blowing Rock, called Windwood. His third and final home, Westglow, was completed in 1917 and is where he lived when he painted Madonna of the Hills and donated it to his church, St. Mary of the Hills (located next door to Edgewood Cottage). Each summer he returned to Blowing Rock and died in 1932 at the age of 73.

According to the Blowing Rock Historical Society, “Before restoration of Edgewood Cottage could take place, a study of its condition was made and it was determined that the building had to be dismantled and rebuilt. The original building was of boxboard design with a post at each corner. Outer boards were nailed to header and footer boards. Though the old materials were used as much as possible and the same footprint was constructed, the rebuilt structure is classified as a reproduction of a historic house. Wall construction was improved for stability and to accommodate modern improvements such as insulation, plumbing, lighting, heating, and fire protection that help to preserve it while providing a comfortable space for activities and events. The home’s most interesting architectural feature is the four room fireplace rebuilt from the original bricks. The original sketch by Daingerfield of the floor plan design of the cottage is on display.”

Owned by the Town of Blowing Rock and managed by the Blowing Rock Historical Society, Edgewood Cottage is home to the Artist in Residence program featuring various artists and their work.

Free admission. And be sure to check out the sculpture of Elliott Daingerfield by Brenda Councill, outside the cottage.