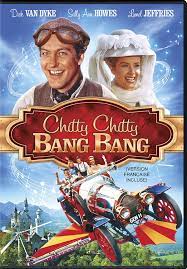 Fifty-five years after its first showing at the App Theatre, Disney’s “Chitty Chitty Bang Bang” a 1968 British musical-fantasy film starring Dick Van Dyke and Sally Ann Howes. At a rural English garage, two children, Jeremy and Jemima Potts, find a car formerly used for racing in Grand Prix in Europe until it crashed and burned in 1909. When they learn the car is due to be scrapped, they beg their father, inventor Caractacus, to save it; he makes lots of unsuccessful attempts to sell his inventions to raise money to buy it, until he earns tips from a song-and-dance act at a carnival. He purchases the car and rebuilds it with a new name, “Chitty Chitty Bang Bang” for the unusual noise of its engine. The film will be screened at 10 a.m. on Saturday, July 30.