Heirloom Apples in the High Country 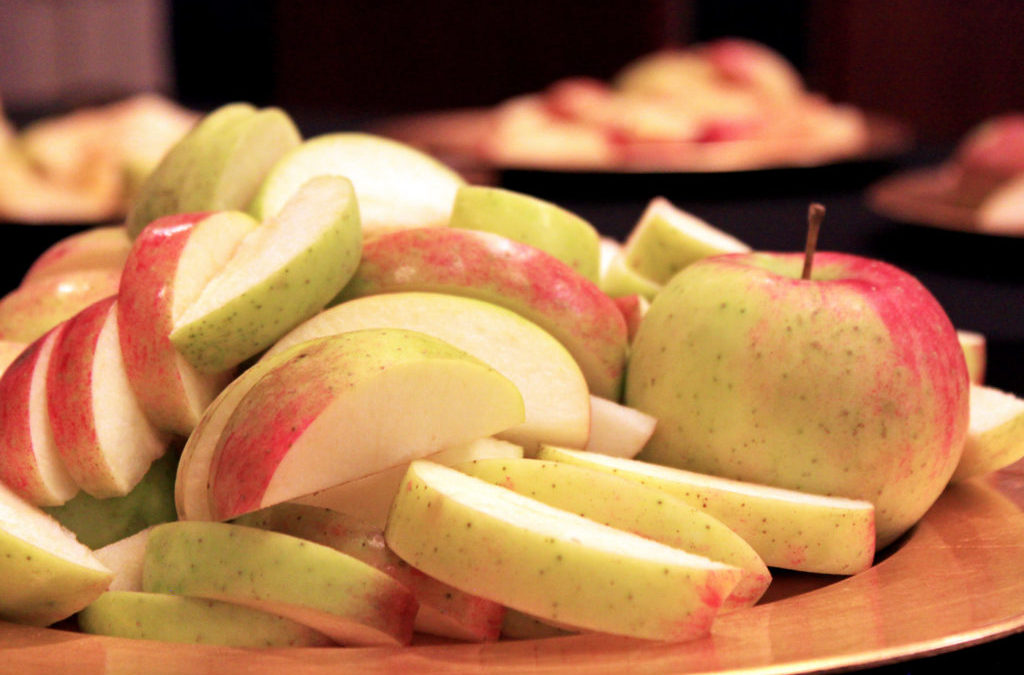 It’s apple season! In the fall, High Country produce stands and farmers markets are bursting with unique apple varieties. In Blowing Rock, local apples are available at Sunset Tees & Hattery and Blowing Rock Market during the fall season. Which apples are best for making apple pie? What about cider? What makes the NC High Country ideal for growing so many varieties of apples? Bill Moretz of Moretz Mountain Orchard was happy to answer those questions and many more at his apple tasting & presentation at the Blowing Rock Art & History Museum‘s Scholars & Scones program. We’ve compiled some facts from the event for you here!

Moretz Mountain Orchard grows over 100 varieties of apples, specializing in some heirlooms that can be hard to find elsewhere. Bill brought eight different apples to sample; all so different and all delicious. Here’s what he told us about each one:

Winter Greening
This is an excellent apple for cooking. It comes in a little early so it’s available sooner than some other varieties. It’s bit tart, and tends to brown very fast after cutting.

Virginia Beauty
An antique variety discovered on the edge of a swamp from a chance seedling, Virginia Beauty apples have a distinct flavor that can hook you! They have a varying shape and a russeted cavity on the stem end.Striped Rome
Striped Rome Beauty is a bit softer than grocery Romes, but has more flavor. A good cooking apple.

Senator
Also known as Oliver, this variety is Moretz Mountain Farm’s best pie apple. It has excellent flavor and juiciness for fresh eating, too. The flavor can be compared to Jonathan apples. It was originated in Arkansas in the early 1800’s. Red and round with a good medium size.

Winter Banana
A “Goldilocks” apple, this one is not too tart or too sweet, making it a favorite for fresh eating. Yellow fruit with a very interesting crisp texture. Winter banana was developed in Indiana in 1876. Lots of orchards have it as it’s great as a pollinator. But as a pollinator, the fruit is usually thinned to increase spring blooms.

Snow Apple
Also called Famuese, this variety is from Quebec. Was once thought related to the Macintosh, but DNA testing has revealed otherwise. The Snow Apple has white flesh and is sweet and juicy.

Green Pippin
Green Pippin was developed in 1800s and is a northern apple. It’s a moderately tart, good flavored apple that can be eaten out of hand or cooked for terrific apple sauce.

Dula Beauty
Dula Beauty is a Caldwell County-born apple, grown from the seeds of a Limbertwig. The fruit is large, dark red, crisp and juicy.

Bill Moretz is an expert on apples, and Moretz Mountain Orchard is a third generation family farm founded in 1933.  The NC High Country is well-suited to apple growing. Many varieties can’t be grown this far south because of warmer temperatures. However, the higher elevations along the Blue Ridge Mountains offer colder winters and milder summers, which is just right for many types of apples. The growing area can have a large impact on the characteristics of apples, even for the same variety. For example, Bill said that Yellow Transparent apples have soft flesh when grown here in NC, but those grown in Alaska are firm cubing apples

The special climate of this area probably influenced Moses Cone’s decision to grow certain kinds of apples. Cone was very interested in horticulture, and he planted hundreds of apple trees on his Blowing Rock estate. There were several varieties, but Bill told us many of them were Macintosh apples. The Cone family operated grocery businesses in Maryland, so Moses would have been familiar with this northern apple. However, the Macintosh was not available this far south- until Cone planted them here in the Blue Ridge Mountains. It’s estimated that there were 12-16,000 varieties of apples grown in the US at one point. There are discrepancies with the number as some apples might have regional names, and many others have become extinct. That number includes over 300 varieties of red delicious, though most agree that the flavor has not been prioritized in those varieties.

Apple cider is found at local markets this time of year, too. Bill says that the smaller the apple and rustier the skin, the better it is for ciders. Smaller apples tend to have intense flavor. And tannins in deep red or russet skins help with flavor balance and shelf life. Did you know that pulp from large-scale cider production is fed to livestock?  Hard cider has become a large industry in the US, and has helped stabilize the price for domestic growers, and keep them in demand.

Bill was glad to share some general facts about apples, too. For example, modern apples varieties are clones, grafted onto root stock. Morel mushrooms do grow under apple trees. And apples can last for years in commercial settings through ethylene control (though Bill insists that there is something unacceptable about a 5-year old apple, and we can’t disagree with that)

Apples are a special part of the food identity of the High Country. If you’re interested learning more about regional foods and how they affect our culture, check out the archive page for the Farm, Forage, Feast: High Country Foodways exhibit at Blowing Rock Art & History Museum. The archive includes video interviews of local food producers!