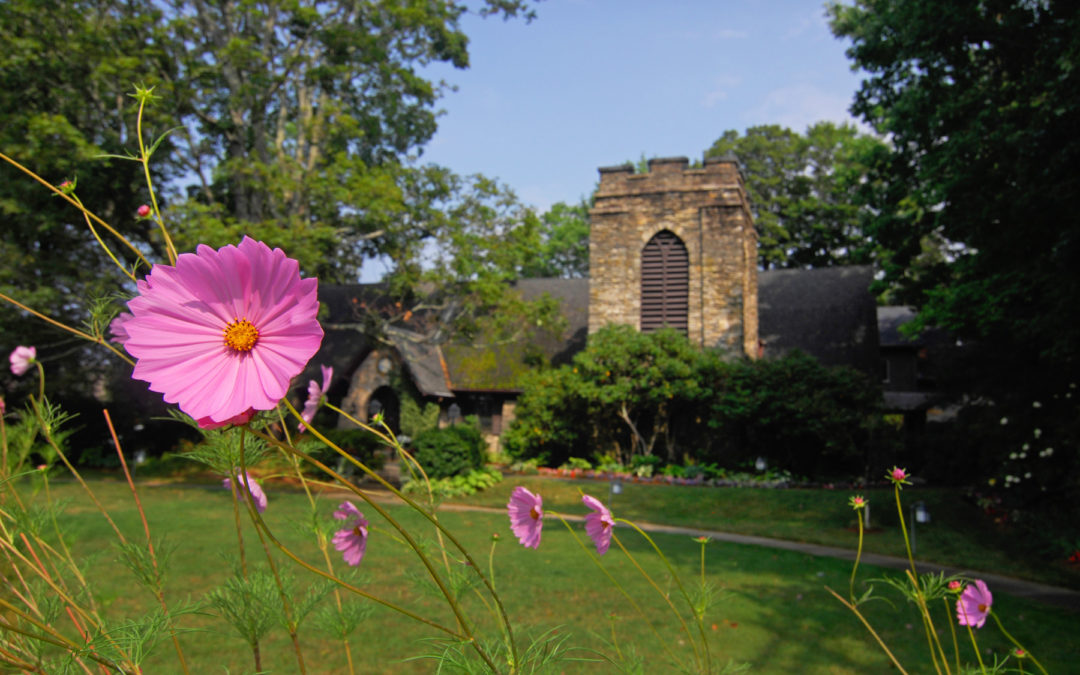 Is Blowing Rock Mitford? We here in Blowing Rock consider it to be Mitford because author Jan Karon lived here when she was inspired to write At Home in Mitford and other books in the series.

*St. Mary of the Hills Episcopal Church is often considered to be the inspiration for The Lord’s Chapel, which is described as having “a fine Norman tower and showy gardens.” Anyone who sees St. Mary’s church recognizes it immediately in this description. In her acknowledgements for “At Home in Mitford,” Karon offers “warm thanks to Father James Harris, who inspired and encouraged me.” Jim Harris was the pastor at St. Mary of the Hills at the time the Mitford stories were published in the Blowing Rocket newspaper. Father Tim might even be a nod to this friend.

*Miss Sadie’s House might very well be inspired by Flat Top Manor at Moses Cone Memorial Park, once the summer home of Moses and Bertha Cone. Seen to the north from almost any high spot in Blowing Rock, the manor overlooks Blowing Rock from the Blue Ridge Parkway. It is surrounded by 3600 acres of forest, meadow, and old apple orchards. You can find the Cone’s Apple Barn along the trails. Miss Sadie’s home, Fernbank, has “the most sweeping view” in Mitford, where “blue mountains rolled like waves” to the west. Visit the front porch at Flat Top and you’ll be transported to Miss Sadie’s.

*Right in the middle of our downtown is Memorial Park, which could be considered the “town green.” A monument to those native sons who gave their lives defending our nation is prominently displayed at the front of the park. And our Town Hall is directly next to Memorial Park, just like in Mitford.

*Mitford’s Grill, where all the locals eat, is reminiscent of Sonny’s Grill on Main Street. Sonny’s no longer stands, but is commemorated by a plaque at the former site next to Six Pence Pub.

*Blowing Rock used to have two small grocers on Main Street. Craig’s, where Jan shopped for fresh Globe corn and other treats, now houses Windwood Antiques (note the original floors). Craig’s would have been a lot like The Local.

*Many locals saw our beloved Jerry Burns, the long-time editor of The Blowing Rocket, in the character of J.C. Hogan, the editor of the Mitford Muse. Always armed with his camera to capture every community happening, large or small, Jerry was always eager to share scenes from life in Blowing Rock.

*Laurel Lane intersects Main Street as one of the main routes to Blowing Rock neighborhoods. Maybe it is one reason Mitford is “where streets are named for flowers?”

*Karon also thanks her doctor, Charles “Bucky” Davant, III, in the acknowledgements. She said he “also doctors all of Mitford.” The doctor in Mitford also has an interesting nickname: Hoppy.

Blowing Rock hosted events called Mitford Days in 2007 and Return to Mitford in 2011**, where Mitford readers could come and enjoy the local atmosphere and imagine it as Mitford. On the event tour, fans also passed by the stone wall in the Mayview neighborhood, the hospital on the hill, and the offices of The Blowing Rocket newspaper, where the first Mitford stories were published.

Here is an excerpt from an interview with Jerry Burns, the late editor of The Blowing Rocket who published the stories in the local paper. He speaks about the history of The Mitford Years in The Blowing Rocket and his friendship with author Jan Karon.

“Jan Karon wasn’t convinced there was a market for a book without sex, violence or vulgar language. She had her doubts even about the story being well received by her community of friends and neighbors, much less the world outside of her newly adopted home of Blowing Rock[…] After I read the first few chapters of The Mitford Years[…] I was hooked and the more I read the more I share Jan’s perception of the small town with the big heart. I am proud to say that in short order the Blowing Rocket began sharing the story of Mitford with our readers and for the next two years there wasn’t a person in the High Country that didn’t have a friend in Father Tim. Times were good for the Rocket, very good.

[…] As the popularity of Father Tim and Mitford grew, so did our list of subscribers. People that had never been to Blowing Rock knew it as Mitford. It was almost fighting words not to agree that Father Tim and all the other characters from Mitford were indeed patterned after real people in Blowing Rock. Despite every effort to leave Mitford in the imagination of the Jan Karon fan, Blowing Rock was Mitford, and Blowing Rock was a destination for Mitford fans.

[…] By the third week of running The Mitford Years, residents began associating characters from the weekly feature with friends and neighbors and Lord’s Chapel and Main Street Grill were real places in a real town. By the end of the first year running Jan’s weekly serial, our subscription list grew by leaps and bounds, and you can believe this or not, but one family actually subscribed to two copies each week. “I don’t want to wait until my daughter and husband read the paper,” said a wife. “I want my own copy to read as soon as I get it.” So popular was her Mitford that one week there was a major fire on Sunset Drive, totally destroying a business. Even with pictures of the fire plastered all over the front page, the rumblings for the whole week weren’t about the fire, but that Father Tim had met a young lad named Dooley.
Those of you that know Jan Karon know that she is, indeed, the very person that would call Mitford home. She found a comfortable life in her Mitford, until… she became a best selling author!

[…] I do remember very clearly, however, that having read her first chapters of Mitford over the last couple of years, were were about to see something big happen, and while Jan may have had her apprehension, I had a good feeling. Now that I think about it, having come to know Jan Karon – her values, her compassion, and her passion for finding all the good in people and community – it was more than a good feeling. I know now it was faith… pure and simple faith! Well, the rest is history.

[…] Ask Jan Karon about Blowing Rock being Mitford, and you’ll get a quick denial. She might say, for her, Blowing Rock was perhaps her inspiration for Mitford, and the population of Mitford was similar to a number of residents of Blowing Rock, but Jan’s Mitford is one thing, and her reader’s Mitford is there for the imagination. Her theory? Everyone has a Mitford and its makeup, lifestyle and atmosphere are molded by personal values and priorities. Now that is what you will hear when you ask Jan about her Mitford. When you ask me…

Blowing Rock is where Mitford was born and where the people that populated it live and continue their lives. And while we aren’t denying that there may be more than one Mitford out there, our Mitford is uniquely our own, and thanks to Jan Karon we see our village and its people reflected in a mirror that projects an image that would be the envy of any community.”
(Full interview published in the 2007 guide to Mitford Days in Blowing Rock.)

The Blowing Rocket printed a tribute to Mitford with sketches from Father Tim – The Mitford Years in July 2000. Here’s the full page (click to see larger image). The text in the center reads:

“Because we have many new subscribers to The Blowing Rocket because of a recent mention in author Jan Karon’s Mitford Newsletter, we thought her fans might like to see a sampling of her marvelous characters from her first book At Home in Mitford, which ran from April 6, 1990 to April 24, 1992 in The Rocket as Father Tim – The Mitford Years. Many weeks, during the two years Jan wrote her story of Father Tim, her column was illustrated by a Mitford landmark or an artist rendering of some of the warm and wonderful characters in her story. Shortly after the last installment of Father Tim ran in the newspaper, Jan’s first book hit the newsstands, and the rest is history. Four sequels later she is a veteran of the New York Times Best Seller list and has been [touted] as one of America’s most read authors. We hope all our old subscribers and our new ones enjoy these charming characters which were introduced into the Blowing Rock atmosphere each week. We also hope that these sketches of Father Tim and his close family of friends meet every expectation that you imagined as you enjoyed being a part of the Mitford atmosphere.”

Here is a letter from Jan Karon, published originally in the 2007 guide to Mitford Days in Blowing Rock:

“There are Mitfords all over the country. And though I’ve been to many of them, Blowing Rock is my favorite.
What does it take to be a Mitford, anyway? The most fundamental requirement is a true sense of community and connection. That’s what all of us want, what each of us craves, and some little towns manage it better than others. It requires that we actually care about our neighbors and it especially requires that we be able to put in more than we take out. As someone who has made a home in several quite different places, I’ve learned it’s hard to make Mitford real. It takes energy and caring and commitment and reach out and reaching in and forgiveness and understanding and laughter and faith and especially, perhaps, the willingness to let go of judging others, which is definitely God’s job.

I hope – and believe – that you will find most, and possibly even all of these qualities in the people of Blowing Rock, where the first books in the Mitford series were written. On occasion, the traffic may get a little congested, and a parking space impossible to find, but then, no Mitford is ever perfect – or it wouldn’t be Mitford.

Along with Father Tim and Cynthia and Dooley and Miss Sadie and Uncle Billy and all the other characters whose spirits are both real and present, I bid you the warmest of welcomes. We’re proud to have you and very eager to please you.

May God bless you tenderly as you laugh and dream and make fond memories in our little town with the big heart!
Faithfully,
Jan Karon”
(2007)

The Mitford series is published by Penguin Random House. More information on all of Jan Karon’s books can be found at www.mitfordbooks.com.

**Mitford Days in Blowing Rock and Return to Mitford were one-time events produced in conjunction with the Blowing Rock Chamber of Commerce and Penguin Books. There are no current plans for more Mitford-themed events in Blowing Rock.