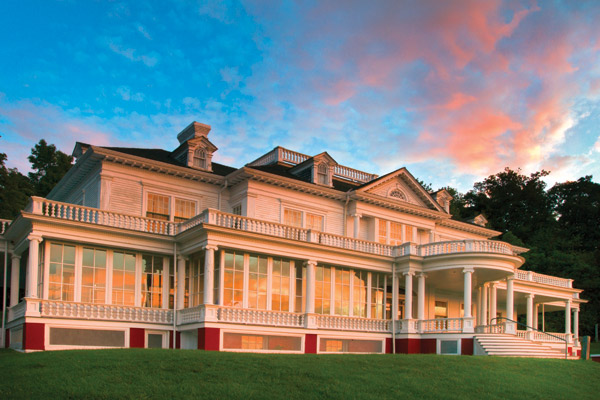 This one-day suggested itinerary is best during the summer and fall seasons, due to availability of activities. Enjoy lots of art and history in Blowing Rock!

-Start the day at Moses Cone Manor & Parkway Craft Center. There is plenty to enjoy just looking at the mansion, with classic twentieth-century architecture. Inside, the lower floor houses the Parkway Craft Center, with handmade works by members of the Southern Highland Craft Guild. On most summer days, there are live demonstrations by artisans on the front porch. On summer and fall weekends, you can enjoy a free upstairs tour, though you will need to reserve the tour in advance. Reservations are accepted beginning at 9 a.m. on Friday for the weekend of the requested tour only, and a limited number is allowed on each tour. Don’t miss the antique vehicles inside the stables, which now also house the public restrooms on the property.

-The Blowing Rock Art & History Museum is next, and it’s located right in downtown Blowing Rock. Featuring rotating exhibits that showcase the rich culture, visual and musical art, and history of the Southern Appalachians, there is always something beautiful and interesting to see at the museum. Past exhibits are incredibly varied, and include displays of antique Appalachian toys, 19th Century Romantic paintings, the Bruce Barclay Cameron Duck Decoy Collection, traditional Appalachian musical instruments, and photography by Margaret Morley. Admission is free! See hours and current exhibits on the museum’s website.

-And if you are visiting between May and September, be sure to stop in at the Artists in Residence at Edgewood Cottage, right next to the museum. This series features a different regional artist each week, all working in a studio setting!

-Lunch and downtown galleries- Take in lunch at one of the great locations on Main Street or Sunset Drive before getting started on your gallery tour. Browse the galleries in Blowing Rock, which feature everything from jewelry and Appalachian pottery to oil paintings and glass work. In several cases, the galleries are run by artists, so be sure to ask. The conversations that follow are always worth having.

-From June through August, wrap up your evening in Boone at Horn in the West, the nation’s longest-running Revolutionary War outdoor drama.  The play brings to life the story of the hardy pioneers who, with the help of famed frontiersman, Daniel Boone, and Cherokee allies, settled in the Blue Ridge wilderness as they sought freedom from British tyranny. If you can’t make a show, the Hickory Ridge Homestead at the show grounds is open from May to October. Staffed with interpreters in period clothing, Hickory Ridge Living History Museum’s series of authentic, historical cabins give visitors a glimpse into the past and a feeling for the daily lives of early mountain settlers.